Are Ghosts, Demons, Angels and Nations Real or Fictions and Illusions? – 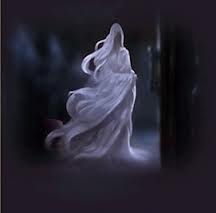 How you answer these questions says a lot about your critical thinking skills, premises and how effective indoctrination and propaganda has been on you.

Let’s first establish what is meant by Real. There are experiences that only we have and are unable to share directly with others such as our emotions and thoughts. Let’s consider these to be Subjective, yet Real to an individual. I can tell you that I love you, and can demonstrate that love, but I cannot share it with you directly. I cannot prove that I love you, nor can you prove that I don’t. Each of us has a very real, subjective, emotional and intellectual life.

There are also experiences that we can almost universally agree upon based on our individual experiences and which are shared with others. If I say that “my mug is empty,” a simple glace by you or any other sighted person can affirm that indeed, my mug is empty. (I’ll tend to my empty mug while you consider the foregoing)

Believers accept that something exists even if there is no objective or mutually experiential evidence for this something’s existence. Nonbelievers simply conduct themselves with experience based observations that this something does not in fact exist. So ghosts, demons and angels may or may not exist, but that doesn’t change the reality that their existence can only be confirmed by personal, subjective experience.

Are Nations and Governments Real or Fictions and Illusions?

What about Nations and Governments? Do they exist subjectively or objectively? If I ask you to prove that a nation exists, are you able to prove it? I’m presently in North America which is the name given to something that actually exists, a continental land mass that each of us can experience directly by our senses. Since everyone on the planet is able to experience the continent directly it objectively exists.

Now prove the existence of Canada and its Provinces; the United States and its supposedly sovereign States, the borders between them and then prove that their governments exist objectively. Borders are imaginary lines on the ground. Nations are fictional entities within those imaginary lines on the ground and governments are fictional entities created on paper and agreed to or disputed by communities of individuals. It is impossible to prove objectively that any of these things exist. Border crossings don’t prove the existence of imaginary lines on the ground. Armed Forces are individual human beings under the umbrella of the fictional nations and governments. And none of these fictions are permanent or have any authority in fact, just in fiction. Don’t believe me? Check this map of the rise and fall of fictional nations and governments over time.

Suspension of Disbelief and Agreed Upon Fictions

Magick is Real in my personal experience

Nations, governments and borders are agreed upon fictions, until they are no longer agreed upon. Who benefits from these Agreed Upon Fictions? Primarily those who wield imaginary power in the imaginary nation, state or government. Most citizens of these fictional entities live their lives without giving much thought to the nature of such abstractions, until these fictions begin to negatively impact the citizen(s) personally. Every Nation, State and Government is an Agreed Upon Fiction that requires the Suspension of Disbelief.

Suspension of Disbelief allows for some wonderful personally subjective experiences. Experiencing a film in a darkened theater allows us to temporarily suspend disbelief so we can immerse ourselves in the sights and sounds created for our entertainment. The objective reality is that we are viewing colored lights and shadows on a wall while synchronized, synthetic sounds are piped into the auditorium. If the creative team did a good job you temporarily believe you are witness to actual events whether they are pure fiction or based on someone’s subjective view of supposedly actual events.

Suspension of Disbelief and Agreed Upon Fictions are required and sometimes demanded in order to accept the illusions of Nations, States and Governments.

The Illusion of Citizenship – “Let me see your papers!”

With the rise of ever more demanding governments in the world citizenship and residency has become a real issue for some folks. For some this is a life or death situation, such as the mentally disabled young Canadian man, who was born in Canada to US parents. Why is his situation dire? Because the US government considers him a US citizen as well and is demanding that his parents pay exorbitant taxes on the savings they’ve set aside to care for their son, even though he has never been a resident of the US. And since the young man is mentally disabled, he is unable to renounce his US citizenship to the satisfaction of the fictitious government in the fictitious District of Columbia.

Has anyone else recognized or contemplated the ridiculousness of this situation?

In most of the Constitutions of the Western and democratic nations is some recognition of basic Human Rights, one of which is ownership of one’s person and the right to travel freely regardless of the accidental (to the individual) location of one’s birth. Every argument pro and con regarding these issues begin with the premise that “Fictional” entities and imaginary lines on the ground have the authority to undermine or negate our Natural Rights as Individuals.

In the broadest sense it is a nation’s claim of ownership of individuals. It’s not a Passport, it’s a “Slave Card,” to use Jeff Berwick’s term, and it can be denied or revoked by bureaucrats of the fictional entity known as the government or state, which is subject to change at any time with or without the approval of the tax-cows that feed these fictional entities.

Yet over generations we have allowed the un-elected to trample Natural Rights.

How is citizenship determined? Here’s my real life example:

– I was born in the States to Canadian parents, I’m thereby a US citizen by the accidental location of my birth, and can establish Canadian citizenship based upon my parents’.

– My paternal grandfather was a Pole who settled in Canada, thereby granting me the ability to establish Polish citizenship based on my heritage.

– My maternal grandmother was of Irish and French Canadian heritage, which allows me to establish Irish citizenship.

– My paternal grandmother was born in Canada to Ukrainian parents. I don’t believe Ukraine offers citizenship based on heritage.

With so many options of citizenship open to this single individual the question arises, “how does citizenship in any of these fictional entities benefit me?” For the most part they don’t. They merely allow non-real or artificial entities to claim ownership and authority over me.

While we fight over where to place the deck chairs on our personal Titanic, the smart folks are already rowing for safety in the lifeboats that for the time being are still available. This will change. FATCA is just one of many Capital Controls being brought to bear against tax-cows in the foundering nations of the west. In Spain it’s almost impossible to move YOUR money out of the country, and the States have already begun limiting the ability of tax-slaves, I mean citizens, from moving their assets out of the country.

The ships of the so-called developed west are sinking and wanting to take all of us with them. Perhaps it’s time we recognized the brilliance of our ancestors who took themselves out of harm’s way.

Perhaps it is time we stopped suspending disbelief and stopped agreeing on fictions.

8 thoughts on “Do You Believe In Ghosts? Demons? Angels? How About Nations and Governments?”