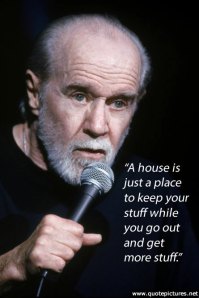 “It’s just stuff.” This has been a personal mantra of mine for over four decades. There are assets that you own, and things that own you; the only difference between the two is whether you have the wisdom and discernment to realize that the choice between these two situations is entirely up to you. While hoarders may get all the interesting (and gross) Reality TV exposure, it is truly amazing how many nominally intelligent people are unwilling to part with material possessions because of the illusory value they impart to the items. This stuff, they have imbued with emotional value that far exceeds the true or utilitarian value of the items involved. This neurosis carries over to intangible belongings: from failing investments, to the illusion of nationality. The accidental location of my birth in the United States is hardly something to be attached to, since both my parents were citizens from Kanada, as were half my grandparents – my maternal grandfater was Native American of the Ojibwe tribe, while the other half of my grandparents were born in Ukraine and Poland. So aside from a lifetime of familiarity and a strongly critical view of the States; why would I, or anyone else place an unreasonable value on an attribute that is based on a total fiction? What fiction, you ask? Imaginary lines on the ground called borders. Over the last decade there is a high probability that you know someone personally who lost their home sooner than they might otherwise simply because they refused to part with stuff. Then lost most of their stuff, anyway. 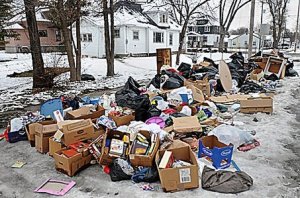 Don’t get me wrong – I can be unreasonable and fool-hearty too! Aside from my daughter, one ex-wife and library of esoterica, I too, have a few mementos that I’d rather not part with. During my lifetime however, I’ve also lost things that I hoped I’d never part with. No matter how well you think you’ve covered the risks, shit happens. When I lived in the High Desert of California during the eighties, I stored all of my possessions in the vacant home of a friend while I was between homes. It’s always the unknown unknowns that get ya. What didn’t I know at the time? That the area where this home in the High Desert was, was also the home of a local Hell’s Angel’s chapter, and as anyone who has ever lived in a desert can affirm, you can see for miles without homes, buildings, forests or other forms of natural cover in your way. 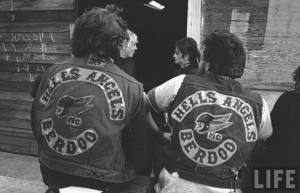 Tomorrow I begin liquidating the dross of my mundane existence in the Great Lakes. While planning my adventure to Chile I mused about what all the stuff I have in storage might be worth. Off the top of my head, I figured it was worth a few grand not including my Jack Jordan original oil painting titled, The Intruders. 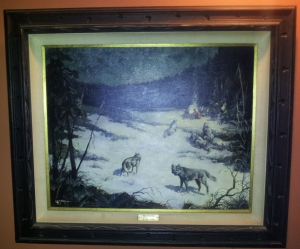 Why such a modest amount? Because most of my stuff has been in storage for over a year! Outta sight, outta mind. The only things I plan to hang on to are those that can easily be packed, secured and travel with me such as junk gold, junk silver and a few pieces of jewelry I purchased at auction for resale. Fortunately, I created an inventory last year of all the antiques, collectibles and household items I was selling on Craigslist and eBay, so I was able to take a gander at what my known inventory is. Unfortunately, I’ve blown a grand just in storage rents. Amazingly, the estimated value of this pile of stuff is over $10,000USD! And that’s at fire-sale pricing, little more than it cost me to acquire this stuff and it doesn’t include all the other mundane dross that I didn’t intend to sell, but now will! Whatever I’m unable to sell over the next three weeks will either be consigned to an art dealer, antique dealer, given to my daughter or given to someone that will appreciate the gift. Here’s a pic of my inventory. 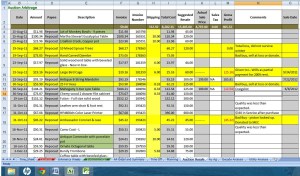 Please consider being a Sponsor for this adventure –

For Background on this Adventure, see my posts –

The Boot-Strap Expat – What a Formal Project Plan Looks Like
https://7thpillar.wordpress.com/2013/09/24/boot-strap-expat-what-a-formal-project-plan-looks-like/